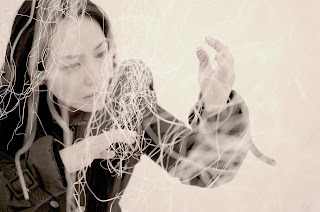 Posted by afoundation at 9:38 AM

In Cut Paper, the old factory floor at the back of the building is now entirely empty but for, at the centre, a giant constructed of web of paper drawn upwards to the ceiling like a spider's web. The giant space echoes with the sound of scissors cutting and we look up to see the source, Abe sitting on a small balcony above the manager's office delicately shaving around the edges of the paper pieces of which fall to the concrete ground. She's deliberate, intent and undistracted by my plodding presence blundering about. Below her sits an invigilator, in the case of my visit reading a book and trying to blend in.

The visitor participates simply by being there, simply by looking. It's captivating. A religious person might search for some kind of spirituality in the scene, some deeper meaning being expressed. I on the other hand pondered the level of concentration required, not just to cut the pages with this skill but to also ignore all other distractions, though photography I think is banned now so that must help. Throughout the period I was in there, she didn't flinch, only now and then stopping in a bid to reignite the momentum of the cutting. Which she always did.

But there is also the concentration of the invigilator; when no visitors are passing through it's simply them and this living sculpture and the constant sound of the cutting. They only interact at the close of each performance though Abe is clearly open to questions. The invigilator told me that Abe has been cutting this paper for over six years and that initially it was just something she did to pass the time, only later did she turn it into a performance, perhaps realising that it's always best to try and make money from the thing you're good at.

Great choice – this is my favourite too. Made me catch my breath when entering the space. The purity of the paper and the sound of the scissors is enchanting.

It would be easy to believe that the gravel pathway you must traverse on your way to the Furnace Room is part of Sachiko Abe’s art installation “Cut Papers”, conveying as it does a sense of pilgrimage or ceremony. The shifting stones slow you down making you aware of each step you take and preparing your mind for the contemplative space you are about you enter. Once through the small doorway you encounter a vast empty chamber and your eyes are instantly drawn to a delicate white structure rising up in the centre of this former industrial space. On closer inspection it becomes evident that this fragile entity is composed of fine filaments of white paper precariously clinging to each other for strength and substance. As the form stretches upwards to the ceiling it narrows until it appears to be hanging by a slender thread. A pathway of this finely shredded paper trails along the concrete floor from the base of this curious object, leading the eye away to the furthest end of the room where it pulls your attention to a live ghostly figure, Japanese artist Sachiko Abe. Precariously perched on a ledge high above our heads and elegantly clothed in a pure white dress Sachiko is meticulously cutting A4 pieces of paper into minute slivers by following the edge of each sheet, turning it clockwise then cutting again and again until she has reduced it into a continuous one millimetre wide thread. The sound of this process is amplified and transmitted live around this immense industrial venue.

There is an obvious fairy-tale perspective to this work, its stillness and strange theatrical performance make it a beautiful yet haunting spectacle which the viewer experiences in reverential silence. Part performance, part installation it is difficult to stop your mind from being captivated by Sachiko’s presence and her undeniably beautiful creation. Unfortunately this means that our attention is diverted away from the obsessive nature of the very act by which the work is produced. It is at this point that we must confess to having seen Sachiko carrying out the same paper cutting exercise before, but in a completely different context and presented in an entirely distinctive manner. This was back in 2004 when she occupied the Concert Hall space of the Bluecoat Arts Centre, Liverpool, but there all similarity ends. At the Bluecoat, Sachiko provided the viewer with a text which partially explained her actions and how she came to spend up to 6 hours a day cutting paper. This included a description of time spent in a mental institution following a breakdown. It was here she discovered that using scissors to cut paper in this meticulous way actually calmed her nerves rather like a form of meditation. When the doctors witnessed the soothing effect of this otherwise potentially dangerous occupation they allowed her to continue. With this story in mind you entered the darkened, intimate space of the concert hall to discover Sachiko acting out her “controlled madness” behind a curtained area at the centre of the room. You could only glimpse her obsessively, though calmly, carrying out her incessant paper cutting through the gaps in the curtains which functioned in the same way as hospital screens. This impression was reinforced by the inclusion of a hospital bed and Sachiko’s garment, a standard hospital gown. Th

There appears to be a significant shift in our role as a viewer once we are denied the “back story” to Sachiko’s performance. At the A Foundation, with no visitor information other than a press release to explain the work, one cannot help but interpret the piece entirely at face value and via the aesthetically beautiful presentation. In raising Sachiko above our heads we now see her transformed into a celestial being whilst we mere mortals occupy a more lowly status on the ground. She is out of reach and unattainable, a beautiful fairy princess who is unaware of our presence, deep in the contemplation of her futile actions and waiting for release.

Sachiko Abe’s work encompasses, performance, drawing, film and sculptural installations using cut papers accumulated over the last seven years. Her practice explores duration, repetition and constraints. This is a paradox as she first started creating artworks after leaving the Self Defense Forces in Japan because ‘the life of artists seemed so free.’ Her work since 1997 has explored the regimes of subjectivity which are imposed by society, most explicitly in her series of performance works, Elevator Girl Friend in which she acted outside of the conventional behaviour of the demure elevator assistants who were a common sight in big department stores. Abe says of this work,”While the job sounds boring, it was a “dream job” for young girls because it was believed then that only the most beautiful and elegant person could be assigned to be an elevator girl.”