Bridging Home is a scale model of the artist's own Korean house from his childhood wedged between two buildings on Duke Street, Liverpool. 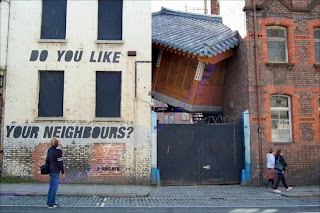 More recently, Do Ho Suh has explored the possibility of coming to terms with his divided cultural background through syncretic elements that integrate eastern and western influences. Moving against the notion of cultural clash (that is to say two worlds or civilisations colliding), he is currently envisioning a new cultural and visual domain, which results from the fusion of his diverse and, at times, conflicting experiences. The seeds of the artist’s process of hybridisation now fertilise the British soil with this new commission for Touched, Bridging Home.

Do Ho Suh is part of Touched in the public realm:
Between 84-86 Duke Street

Posted by afoundation at 4:56 AM