At 5pm on 3rd July 2010, there will be an action with Blessor, a specially designed unmanned arial vehicle. 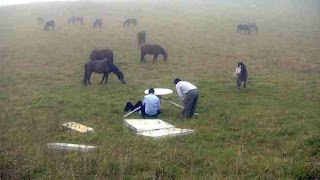 The works of artist Jon Fawcett exhibited in the Blade Galleries are a series that test the interfaces between the boundaries of artistic production, dissemination and reception. The inventory of materials used in his works reads like a crossword puzzle made from the remains of the remixed narratives of JG Ballard and Philip K Dick. In a near future moment; an artist wakes in a lucid dream. His ideas have become avatars in a work of art sponsored by the CIA. The viewer is invited into this liminal space to unravel the threads and read blogs posted by others who have had supernatural experiences.

Fawcett’s use of extensive research into tropes of conspiracy and media cults have allowed him to bring into focus the fuzzy logic of new age mysticism that is proliferating in the era of networked consciousness. His sculptures, video and performances exude a menacing technical precision and seduce with a spectrum of alluring colours but these are aesthetic camouflage to cloak ideas that question the nature of the mediated reality or as the artist says, ‘a fabric of contemporary mythologies.’ In this delicate weave in which ephemeral ideas become locked into the history of material technologies from surveillance drones to kevlar weave, the artist uses strategies that simulate those which have become common in the uncanny world in which we live, paralleling activities such as business, politics and war, and operating on a dispersed, global scale.