A Foundation presents Artur Żmijewski’s first new work produced in the UK, Following Bauhaus, created during a residency within the culturally and politically resonant city of Liverpool. 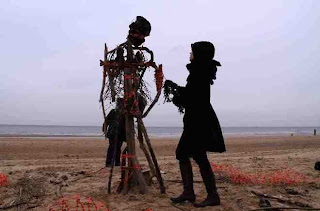 A Foundation invited Zmijewski to explore the social stratification of ‘art’, and after a series of initial meetings with the various groups of people that make up the city’s art community he set up a ‘pop-up art school’ that would attempt to explore this ‘something’ called art and to reconfigure art’s relationship to the wider society. Hosted by the existing School of Fine Art and Design at Liverpool John Moores University, the pop-up school was modelled on the Bauhaus, established in Weimar by Walter Gropius in 1919. The Bauhaus explored a total meltdown of aesthetics and function, revolutionising art training through the notion that design should not merely reflect society but positively influence it. Żmijewski states “Eighty years ago the Bauhaus school invented a new visual reality – I would like to re-attempt this today. It is probably an impossible task, but that is why it is interesting.”

Żmijewski is well known for his use of the workshop as a site to explore social and political stratification. Solutions are never guaranteed, but the journeys are both compelling and revealing. In Liverpool, techniques frequently utilised at the Bauhaus such as drawing using both hands, presenting colour by the posture of the body and collective building became the conduit through which participants were encouraged to analyse their relationship to art, and to each other. Zmijewski and other visiting artists, including Pawel Althamer took the roles of ‘masters’ and ‘journeymen’ for the pop-up school while conscripts from the Art School became ‘apprentices’ - who probably got more than they bargained for but doubtless had an experience that will transform their perspective on the place of art in society.

The final installation in the Furnace at A Foundation will combine a new video work documenting the project along with materials produced during its production.

Workshops
Students of the temporary art school set up as part of Żmijewski’s Liverpool Commission, ‘Following Bauhaus’, will be holding a series of workshops at A Foundation Liverpool to complete the circle of their Bauhaus experience. Żmijewski’s apprentices will become ‘master’s’ leading workshops in movement and dance; architectural modeling; stone carving and graphic design. Places are free but numbers will be limited so contact the gallery to book a place.

Posted by afoundation at 5:58 AM