Life of Imitation:, Ming Wong re-visits the context of the Golden Age of Singapore cinema in the 1950s and 60s; an era of nation building, economic struggle and rapid modernisation. 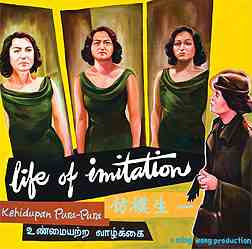 Inspired by the rich legacy, Wong re-reads “national cinema” constructed through language, role-playing and identity, by re-interpreting films that are familiar to audiences spanning two generations, and which engage with performative notions of mis-casting and parroting. The first is a compendium of works by P. Ramlee, the wunderkind of Malay cinema. The second is the Hollywood melodrama Imitation of Life (1959) by Douglas Sirk about a black mother and her “white” daughter. The third is Wong Kar Wai’s In the Mood for Love (2000) with actress Maggie Cheung rehearsing a scene where she confronts her spouse‘s infidelity. 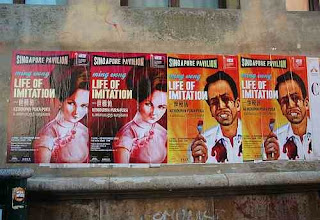 Through these video interventions, the viewer is presented with questions relating to roots, hybrid and the politics of becoming. The exhibition also unveils cinema posters by Singapore’s last surviving billboard painter; rare screen memorabilia of a private collector; and documentaries by film-maker Sherman Ong. The Singapore Art Museum re-stages this award-winning exhibition with a new design and additional exhibits. 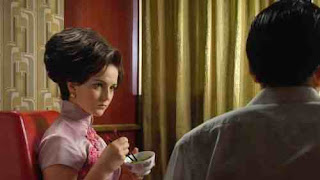 This exhibition was first presented at the Singapore Pavilion, 53rd Venice Biennale 2009. It won the Biennale’s Special Jury Mention award. Tang Fu Kuen is the guest curator of this exhibition.

Posted by afoundation at 9:15 AM