The Young and The Restless

“Where the hell is it?” screamed the Scouse taxi driver struggling to find the opening party the Friday before last for the Liverpool Biennial in the Old Port area of the city. Warehouse after warehouse passed by until I spotted a beacon in the dark: a stream of silver-haired men (eminent European curators, no doubt) and young artists with big beards and tweed jackets moving toward the A Foundation’s complex for the Bloomberg New Contemporaries 2008 show. The trickle of partygoers quickly grew into, if not a flood, at least a tributary, with London dealer Anthony Reynolds, Letter to Brezhnev director Chris Bernard, and Ed Linse of Artists Anonymous spilling out into the beanbag-chair-strewn street. Inside, the warren of galleries (the place takes the warehouse-chic aesthetic to a whole new level) were flush with what can only be described as Liverpool’s “team youth”: bright-eyed young things who’ve produced some of the best new work I’ve seen in ages. 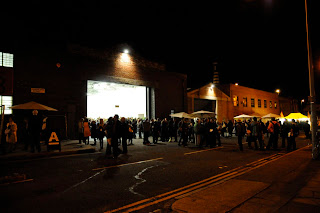 New Contemporaries board chair Sacha Craddock grabbed me and scrambled over Joe Doldon’s intricate cardboard Untitled (Floor) sculpture to rally the artists. The trio summoned—Raakhee Lakhtaria, Paul Bratt, and Haroon Mirza—seemed pleased but dazed (no doubt at the thought of taking those first tentative steps into the shark-infested waters of the art market) by the first-night jamboree. Indeed, work by fellow artist Steve Bishop was already being snapped up. His taxidermied fox shot through with fluorescent light tubes (Suspension of Disbelief)—one onlooker cheekily remarked that “taxidermy is a bit 2007”—obviously found favor with a Norwegian collector, who bagged the piece. The Scandinavian follows in the footsteps of Charles Saatchi, who bought two works by Bishop at his recent Royal College of Art MA show in London. Meanwhile, two soberly suited men from sponsor Bloomberg pored over video work by another young artist, Beth Collar. 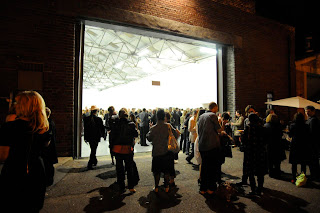 After a mad dash for some air and alcohol at the alfresco bar, I spotted artist David Altmejd and his London dealer, Stuart Shave, chatting by the nearby paella stand. The Canadian artist, known for his disquieting, fantastic creations (who else has made werewolf heads such a hot topic?), continues to be one of the art world’s most prolific practitioners. Already on the plate are a solo show linked to the opera Doctor Atomic, at the Metropolitan Opera’s gallery in New York; an exhibition of works at Shave’s gallery in October (which Altmejd claims will be “very sexual”); and a stint at the Art Gallery Ontario. 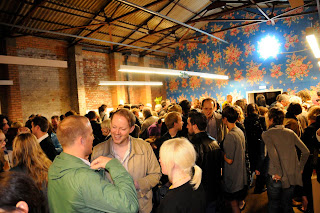 Soon the action moved to a second retrofitted factory space across the road, where the primary “Made Up” biennial bash was kicking off. Artist Sarah Sze and museum directors Simon Groom and Reyahn King were spotted en route, as were Laurence Sillars, curator at Tate Liverpool, and Branwen Jones, director of Andrea Rosen Gallery.

Perhaps it was the lower lighting (sex-shop red) or the presence of local personalities such as drag queen Mandy Romero that prompted an upbeat change in the evening’s tempo. Guests were ready to let their hair down, including biennial director Lewis Biggs, who danced with artist Lisa Milroy while sporting what looked like a blue garter wrapped around his upper arm. Curator Adrian George, looking dapper, encircled the pool of manic dancers. But it was performance artists Corinne Mynatt and Angus Braithwaite who proved to be the most stylish movers on the floor, closely followed by Cedric Christie, who is showing his two “art cars” in the city. The motors, which will eventually be crushed and displayed as paintings, were a big hit with the Liverpudlians. As Christie noted, “Artists Teresa Hubbard and Alexander Birchler even showed me a photograph of their dealer perched on the hood.”
— © Gareth Harris 2008
www.artforum.com

All Photos © The Liverpool Biennial
www.flickr.com/photos/liverpoolbiennial

Posted by afoundation at 7:51 AM