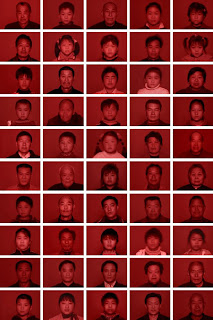 Fantasy Studio Project presents the work of seven Korean contemporary artists, who will each be provided with a studio within A Foundation’s complex of converted factory and warehouse spaces for the period of the Liverpool Biennial. Rather than literally reconstruct the individual artists’ permanent studio, each will create a ‘fantasy studio’, which attempts to re-interpret the exhibition space as a location where practice ‘bleeds and blends’ with the venue itself.

Combining elements of a number of traditional exposition formats: the group show, the residency, the performance, the national showcase; Fantasy Studio Project attempts to explode the confinements of each, generating a new set of problems and intricacies. Through this process, Fantasy Studio Project explores the changing nature of the studio within artistic practice, and addresses the alienating effect on audiences of transposing ideas generated in one culture onto another.

Kyungwoo Chun will present his Thousands project. Three years in the making, this work brings together one thousand photographic portraits of individuals from the Chinese mainland, all of whom share the same surname as the artist, which literally translates as “a thousand”. Chu will also show a new participatory work, A Thousand Answers.

Yeondoo Jung’s work explores ideas around urban dislocation, memory and fantasy. The video he is exhibiting in Liverpool, Nostalgia, depicts a series of imagined idyllic landscapes, constructed in a studio. Alongside this work, Jung will show documentary footage revealing the making process.

Yongbaek Lee will show stage props and costumes from the production of his video Angel Soldier, which explores a variety of both seen and unseen conflicts in the world. Lee’s other works include mirrors that appear to crack when the view stares into them.

Junebum Park’s video, Hypermarket 4, is viewed from the artist’s eye perspective, as he makes architectural alterations to a static shot of Berlin’s Hamburger Bahnhof museum, transforming it into a supermarket. For Fantasy Studio Project, Park will make a new video work, in which A Foundation’s Furnace gallery space will receive a similar makeover.

Hyun-Mi Yoo injects doubt into our reading of three-dimensional space in a two-dimensional image. Yoo paints directly onto domestic space, adding objects and shadows, and then presents the work as a photograph. In Liverpool, the artist will make new work that makes explicit the production process.

Young In Hong’s work attempts to reinterpret the cityscape - monolithic architecture, statues of historical and contemporary figures, and so on. Hong’s newly commissioned embroidery work will incorporate a number of cultural and political icons from the city.

Sookyung Yee will produce a life-size sculpture entitled Very Best Statue. Yee canvassed over 100 people in Liverpool, asking them to complete forms that offered choices from a range of physical attributes. Yee has combined the most popular results to produce the city’s ideal figure sculpture.


Supported by The Arts Council of Korea and Samsung Electronics.
Posted by afoundation at 4:27 AM