The A FOUNDATION at Greenland Street hosted a weekend of talks, performance and film to tie in with the ongoing Liverpool Biennial 2008.

The Made Up Weekend, named after the theme of the Biennial itself, was from Thursday until Saturday and explored all kinds of interpretations of the phrase, the power of the imagination and art’s capacity to transport us, to suspend disbelief and generate alternative realities. 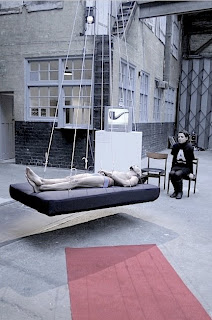 Challenging the idea that rationality and enchantment are incommensurable. Made Up weekend invokes the spectres that haunt not only the artistic imagination. A vision of the world familiar yet often disturbed by occultural visions, scientific anomalies, magic or sublime irrationality. Unbound by critical orthodoxies, Made Up's aporia will entertain many and exasperate some, no doubt encouraged by the multitude of explanations resonating with the city itself. 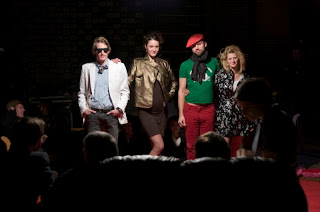 Performances included the UK premiere of Love Club, by acclaimed European artists God’s Entertainment and a rare opportunity to hear the Theremin, one of the earliest electronic musical instruments, played live by Dorit Chrysler. 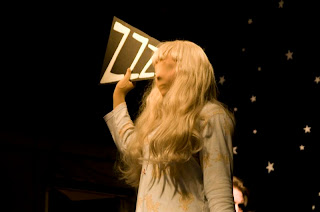 A Foundation’s executive director Mark Waugh said: “The Made Up weekend goes behind the vernacular phrase to explore why we make things up and how artists use the imagination as a tool to communicate the way they see the world." 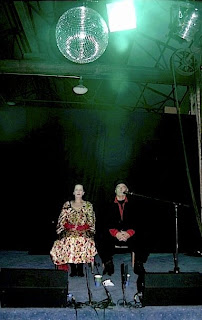 “It will be a stimulating weekend remixing science, critical debate and conversation, performance art, film making, music and pyrotechnics.
Guests include Richard Wilson, whose Turning the Place over has captured the imagination of Liverpool and other artists, including Gods Entertainment from Vienna, Mingering Mike and Tai Shani." 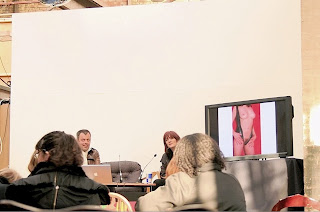 On Friday, highlights included Art Beyond Science – Tomas Saraceno in conversation with Rob La Frenais and Tony White; Ulf Langheinrich spoke with Fact director Mike Stubbs and other talks throughout the day including Cosey Fanni Tutti, Manuel Vason and George Chakravarthi ending with The Amazing Careers of Imaginary Soul Superstars, where Bluecoat artistic director Bryan Biggs was in chatted with David Blandy, the Barefoot Lone Pilgrim, and Mingering Mike, before a DJ set by the latter. 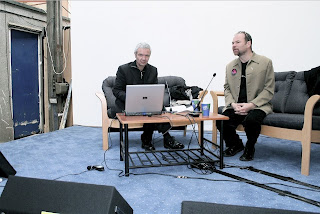 At 10pm, there was the UK premiere of Love Club, a performance by Austrian artists Gods Entertainment.
On Saturday Anne Bean was in conversation with artist Richard Wilson. 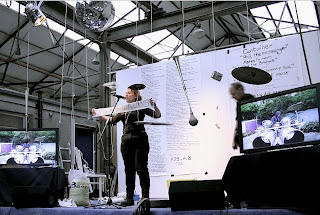 There was a chance for a Face-to-Face encounter with SJ Curtis and to experience Super Nase & Co throughout the day. Chila Kumari Burman, Yeondoo Jung in conversation as well as a panel discussion with Jim Holland, James Lawler and Gary Everett followed by an evenings entertainment that included a presentation by Stewart Home and Sally O'Reilly. Patricide punctuated the event, after film screenings that included Artists Anonymous. 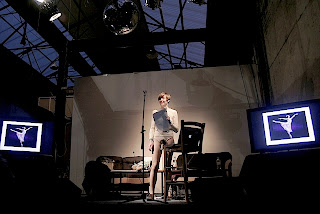 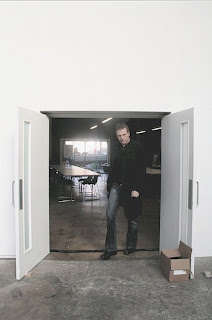 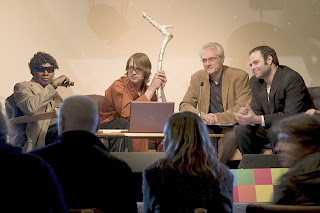