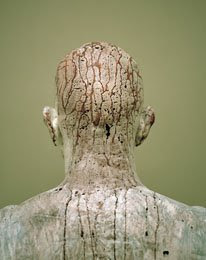 Since first photographing Franco B’s performance, I Miss You! in 1999, Manuel Vason has worked with an impressive roll call of performance and live artists, including Ron Athey, Stuart Brisley, Alastair MacLennan, Kira O’Reilly and Guillermo Gomez-Pena. Describing his photographs as collaborations, the artists perform exclusively for Vason, shooting in locations and conditions that allow the performer the opportunity to experiment with new relationships with the site and body.

Vason operates within the contentious space, or moment, in which a performance is documented on camera. Encouraging the artists he works with to channel their performance towards one climatic moment – the instant the camera’s shutter clicks – Vason’s practice dramatically alters the relationship between the performance and its document; no longer are they distant and separate, but rather in conversation with each other.

At A Foundation, Manuel Vason will show a selection of works from his series, Encounters, including two new works never shown before. The exhibition is accompanied by a full colour publication of the same name published by Arnolfini and edited by Dominic Johnson. The book provides an overview of the artist’s practice and includes essays by Rebecca Schneider, Tracey Warr and Kate Random Love as well as a series of commissioned artist writings on the collaborative process by Ernst Fischer, Helen Spackman, Richard Hancock and Traci Kelly, Anne Seagrave, and other performance practitioners.

Posted by afoundation at 4:24 AM