Story without a Name - Peres Projects

Javier Peres is pleased to announce "Story without a Name," a group exhibition curated by Blair Taylor. The exhibition includes film and collage by Dash Snow, and sculpture by Carol Bove, Terence Koh and Andrew Lord. All four of these artists currently live and work in New York City.

At the onset of the Great Depression in the 1930s, Joseph Cornell took work designing textiles and selling appliances door-to-door to support his family and his habit of collecting ephemera with which to make artwork. He later referred to this period as "a golden age – one of white magic without which I don't know where I would be today." It was during this time that Cornell created a series of collages titled "Story without a Name – for Max Ernst," from which the present exhibition takes its name and mission. 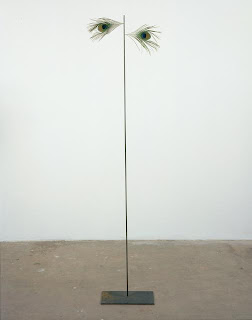 Here, bracketed by disquieting figurative collage and film by Dash Snow, sculptures by Andrew Lord, Carol Bove and Terence Koh anthropomorphize to resemble an eerie gathering (social, Neopagan, alien or otherwise) at the center of the gallery space. The material range – from Super 8 film to ceramics to painted bronze to peacock feathers – provokes a sensual suspension as that between synapses, a realm where dreamscape and corporeality fold together.

Posted by afoundation at 4:54 AM