For the exhibition at Kunsthalle Basel, Goshka Macuga transposes Herbert Bayer's display concept for "Road to Victory", presenting a series of collages made of images coming from several different sources, including Aby Warburg's photographs taken during his exploration of Hopi culture in 1896, Macuga's own photographs from her journey in the USA in 2008, as well as installation shots from the American artist Robert Morris' show at the Tate Gallery in London in 1971. Private photographs from a Vietnam War veteran's collection are also included, which, in contrast to "Road to Victory's" well-defined ideological content, deal with daily, un-heroic, funny or just boring aspects of a soldier's life at a military base in Vietnam. 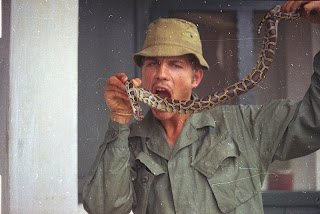 The show also includes replicas of some of the sculptures Robert Morris made for his exhibition at the Tate. Simple constructions made of wood, steel and ropes, they encouraged viewers' physical interaction, but since the museum could not guarantee the visitors' security, the show closed after the first weekend due to the fact that some visitors had injured themselves while using sculptures in a performative way. In the context of the Vietnam War, the possibility of participating in this exhibition at one's own risk can read as a political statement on the nature of the freedom and limitations imposed by the state and (art) institution.

Macuga will also present a new documentary film made in collaboration with the visual anthropologist Julian Gastelo. It is based on the video documentation of their recent journey through the United States, from New York to the Arizona desert, following the route taken by the German art historian Aby Warburg in 1896, when he went to Arizona to study the rituals and iconography of Hopi Indian art.