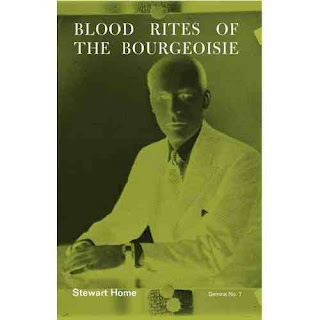 'An exhausted sun compacted into itself. The slow but painless death of literature…Syllables should be moved around the page like clouds passing across the moon. Dense thickets of rhetoric must grow inexorably into an impenetrable jungle of words that overrun any and all attempts to extract a coherent meaning from them.'

You've ended up mirroring the slow drift of an ice floe, the imperceptible passage of distant galaxies through hyper-space. At this point your words in their opaque nothingness literally become 'the ill-will of the people', the spongy referent that animates all post-democratic societies. The cold of interstellar space thousands of degrees below freezing. Abstract Literature: A New Movement in the Visual Arts!

Non-Euclidean geometries. Voices green, purple and red. Strange folds in the fabric of time and space. The universe buckled, bent and sent into reverse. Apocalypse postponed, time running backwards and in slow-mo.Your words have developed an intolerance to alcohol. They are overwhelmed by feelings of existential dread and can't bear to be separated from each other. They've arranged themselves into a single extended sentence from some eldritch dimension unknown to man, a slow stuttering echo of Molly Bloom's soliloquy at the end of Ulysses.

"Written in the second person and in part generated from spam emails, Blood Rites of the Bourgeoisie is a shot in the arm for prose fiction; and a kick up the backside for the male dominated London art world. More shocking than 5000 volts of unadulterated electricity! Or, as Malcolm McLaren put it after reading the manuscript on his death bed: "FEMINISM WITH BALLS.""

The Semina series
Blood Rites Of The Bourgeoisie is Semina No. 7. Semina is where the novel has a nervous breakdown. Taking inspiration from the series of nine loose-leaf magazines issued by Californian beat artist Wallace Berman in the 1950s and 1960s, Semina will publish a series of nine books, selected from a combination of open submission and direct commissions, by artists and writers willing to take risks with their prose and who demonstrate total disregard for the conventions that structure received ideas about fiction.


... Not all of these things are present in this novel, but Blood Rites isn't exactly wildly different. Even from the blurb on the back – which public transport users may wish to conceal lest fellow passengers get the wrong end of the stick ("Stewart Home Wants to Deep Throat your New HUGE Dick All Night Long", etc) – the Home devotee is not going to be disappointed. What I'd like to do, though, is introduce him to the non-initiate. Because, as Jenny Turner also said, "I really don't think anyone who is at all interested in the study of literature has any business not knowing the work of Stewart Home."

Let's call this a "novel" for the sake of convenience. This is part of a new imprint organised by Home, called Semina, whose strapline is "where the novel has a nervous breakdown". Home commissions, or accepts submissions, from "writers willing to take risks with their prose and who demonstrate total disregard for the conventions that structure received ideas about fiction". Whether Home's writing can take risks any more, given how far he's gone in the past, is moot; the greatest risk it could take now is to court respectability.

Not likely here. From page 62 of the book: "You are attempting to explain to the critic Kevin Callan the purpose of your computer art. Among the many works you've created are thousands of appropriated penis enlargement spam emails in which you've replaced generic references to girls, women and ladies, with the names of famous female artists." And that is exactly what all the paragraph headings of the book are like. Blood Rites begins like this: "Make Kara Walker Tremble with Desire for your Huge New Penis!" The text that follows reads: "It occurs to you that there has been an abstract movement in art but not in fiction."

In a way, a lot of the book is like this: juxtapositions of (tidied-up) penis-enlargement spam with musings on art, with interruptions from dirty email correspondence from someone called "the Suicide Kid" and someone calling herself "Belle de Jour". (Many have believed that Home was the creator of the "Belle de Jour" blog, and he has fun with this in a 44-page appendix.)

But the important thing about this book is that it is very, very funny. The joke about female artists might seem to be subject to the law of diminishing returns, but I am afraid the headline "Georgina Starr Will Never Laugh At You Again!" made me laugh as much as "Karen Finley's Used G-Strings and Yams For Sale!" Is this demeaning to the artists? "You counter that it draws attention to the way in which their work is devalued by a patriarchal capitalist society that views art activities . . . as one of the few legitimate areas of male emotionality . . ."

Experimental work can be po-faced, stuck up when it contemplates its own daring. What's lovely about Home is that he uses laughter to make you think.