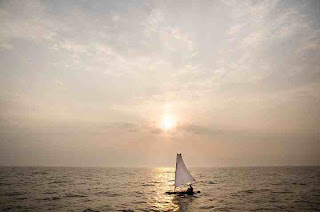 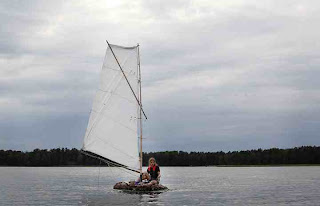 As far as is known, Antti Laitinen is the first Finnish artist to have his artwork on display at the Royal Academy of Arts in London. Laitinen’s body of work It’s My Island is part of the Earth – Art of a changing world exhibition that opened on 3 December. The exhibition features leading artists from across the world, looking at their varied and provocative responses to the theme of climate change.

Among some thirty artists is Antti Laitinen – who himself does not consider climate change to be the main issue in his works. “Climate change is not the main thing, but people have started to look at my work through this theme. I understand this well since climate change is currently a trendy topic”, Laitinen says.

Laitinen’s body of work on display at Earth exhibition, It’s My Island (2007), consists of a selection of videos and photographs. The three simultaneous videos go on to show Laitinen as he builds his own island in the Baltic Sea by dragging two hundred sand bags into the water – using nothing but a spade, sand and stacks.

Building a paradise-like place to somewhere it does not belong is a repeating theme in Laitinen’s works. “The will to build oneself an own independent micro-nation inhabited by a single citizen - I would consider themes such as these to be the starting point for my works, not climate change”, he reckons.

“Not that it’s wrong to interpret my works from that point of view. There is no one right way to read an artwork.”