Orion Maxted & Nadege Derderian - Thoughts on Made Up

"On reflection then, during the weekend, it was impossible to settle on a single section of solid ground from which to absorb the many different points of view expressed, yet as the dust settles, it feels like the unchanging locus of the event was an open-minded and open-hearted refusal. A refusal to seal-off or insulate the boundaries of artistic epistemological and personal enquiry, to make a decision about where art ends, and religion, sex, meditation, illogic etc-etc, begins. Or perhaps if there was a locus it was a pit-bull's snapping teeth, merrily tearing into the clean edges of that ordinarily considered separate and perceptually distinct. 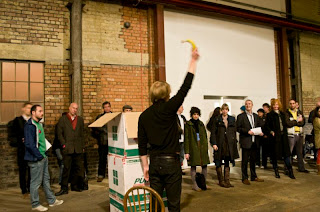 We definitely enjoyed the range of feelings, experiences and connections. The talks worked well in the mix, not repeating or trying to explain away the magic of the performances, but bringing in more understanding around the 'periphery' and a chance to distance from the immediacy of the live work, enough for alternative reflections. Cosey and Andrew's talk was a good example of a related aspect, as they talked not just about their work and the theoretical background of it, but also the everyday life around / intermingled with the work. There were all sorts of questions about the boundaries of art, and the art of boundaries, or lack of.

Only a few thought then…

So once again, thanks it was a pleasure for us both to work with you, and everyone at A Foundation. For myself, Nadege, in particular to give me the possibility to engage on a curatorial level , it has certainly stimulated and open my understanding and enthusiasm about (Live) art events.
And for me, Orion, it was of course a very rich experience to have my own work put into parallel or counter-position with such a divergent range of related artistic approaches in such a carefully considered context."

- © Orion Maxted & Nadege Derderian 2008
protoplay.net
Posted by afoundation at 5:17 AM