On Friday 19th September 2008, a huge party overtook an industrial area near central Liverpool. Within the masses of people wanting their free drinks and overpriced Paella were three exhibitions. Yet one of these, by the ego free ‘Artists Anonymous' had been removed. Over two weeks of intensive installation, a team of assistants helped the Berlin based art collective build a huge warren of rooms within The Furnace space of the A Foundation. Each room was decorated, and in the end resembled some sort of dilapidated yet hip house putting on an art exhibitionfor themselves.

Of course, were this to be the end, that would be fine, people may walk round with intrigue or excitement, but no. Rather than be rational, Artists Anonymous decided on Thursday that the work wasn't right and they were to remove everything. All objectsfrom the rooms were taken out, all patterns stripped from the walls before they were painted white. 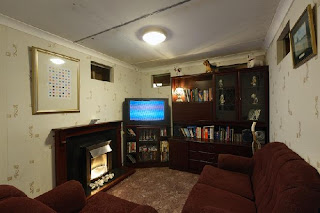 So rushed was this operation before the Biennial party that some of the walls were still wet with fresh paint. Walking around for the first time, I felt like this was no mans land, like I didn't belong there. I experienced that feeling you get when walking somewhere you know you shouldn't be, trying to find something you know you shouldn't be looking for.

In each room was a small photograph on the wall showing what the space had looked like only hours before. Why would they be showing us what the space looked like, could they not have saved some time and effort for us to see the real thing? The aftermath, something that only works in the most remarkable of situations, is prevalent here. With the aftermath as the art rather than as remnants of the art, nobody misses out, everybody is allowed to visit the space and stumble across rooms, write their name in the wet paint on the walls (or complain about the wet paint that has unwittingly covered their clothes). 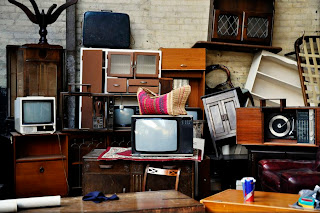 The piece felt politically charged too - thinking about the lines of refugees carrying trailers full of all their belongings. I imagine a ghost town of stark, empty houses, and with signs of living removed, memories and history within that town will fade as the photos do.

This is art as an event and as spectacle, an odd attraction that bewilders people as much as it arouses them. Will the work still feel as fresh in one month, or even one weeks time, when the paint has dried and the smell of alcohol and sweat has left? I can't be sure, but seeing it on day one allows it to stand out in a fantastic year for the Biennial.