Sachiko Abe’s work encompasses, performance, drawing, film and sculptural installations using cut papers accumulated over the last seven years. Her practice explores duration, repetition and constraints. She will be performing at A Foundation for the Touched - The Liverpool Biennial and exhibiting drawings she has completed during her residency in the city. A Foundation has commissioned a film by Ben Rivers that will be shown during each performance. 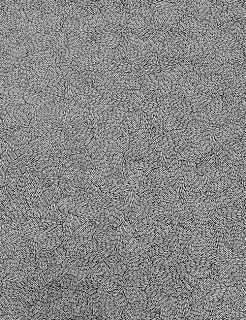 This is a paradox as she first started creating artworks after leaving the Self Defense Forces in Japan because ‘the life of artists seemed so free.’ Her work since 1997 has explored the regimes of subjectivity which are imposed by society, most explicitly in her series of performance works. 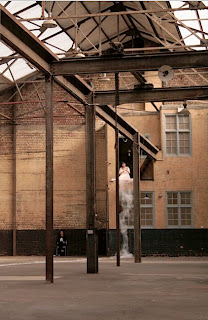 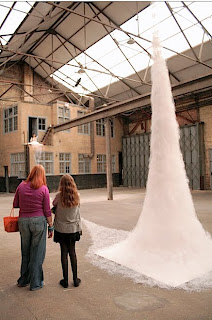 Elevator Girl Friend in which she acted outside of the conventional behaviour of the demure elevator assistants who were a common sight in big department stores. 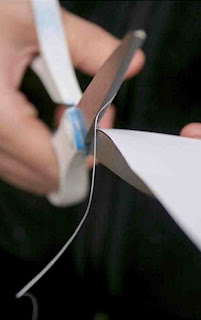 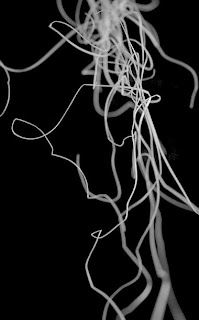 Abe says of this work, ”While the job sounds boring, it was a “dream job” for young girls because it was believed then that only the most beautiful and elegant person could be assigned to be an elevator girl.” 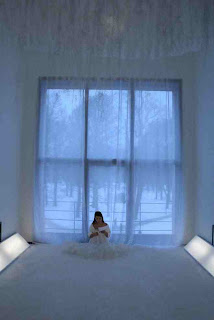 Her more recent works continue to explore disquieting routines that provoke anxiety and touch us in ways we cannot explain. In Cut Papers Abe invites the audience to experience an intimate space in which the constant snipping of scissor blades is the only measure of time passing. At A Foundation Liverpool Abe will perform for the duration of the Biennial but be warned Abe says. “My work is neither beautiful nor meditational.” Rather it is an aesthetic paradox that locates the artist at the center of a field of reciprocal subjectivity, she is an object of the gaze that returns the subject to themselves by activating a feedback loop. 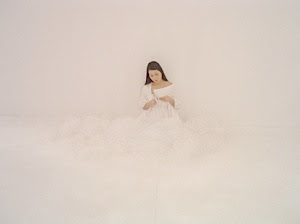 Cut Papers is a series of works that create a surplus of meaning within an apparently simple aesthetic economy. It is this scenic space of perception and production that is the focus of the work. Abe will present the performance in an environment of large scale sculptural interventions in the Furnace gallery and a new large scale drawing work produced during her 2010 residency with A Foundation funded by the Pola Foundation. An intricate graphic weave produced by intensive durational periods of drawing which might be best apporached through the dimension of the fold as expressed by French Philosopher Gilles Deleuze. Like Cut Papers Abe’s drawings invite us to contemplate the intensity of ideas which accumulate and are disseminated in the transformation of a white sheet of paper into medium of communication.

Posted by afoundation at 4:17 AM

A highlight of the Biennial so far for me. 'Cut Paper' by Sachiko Abe at A Foundation. Its beautiful and incredibly calming. There are seats in the room so you can sit and enjoy the performance. Basically there's a large pillar of cut paper in the room that leads back to Sachiko Abe who sits up high cutting paper. Her scissors are connected to a speaker so you hear every cut. Its oddly calming to listen to and incredibly beautiful to look at. However, she says its neither of those things. She says it is an aestheic paradox that locates the artist at the center of a field of reciprocal subjectivity, she is an object of the gaze that returns the subject to themselves by activating a feedback loop. I'm a photographer so for me I just see a lovely moment and try my best to photograph it. Amazingly she is going to be there for the duration of the Biennial, all 10 weeks. Thats quite insane. 10 weeks cutting paper. Stunning.

# Nice to see a big show of Antti Laitinen's work at A Foundation. Heroic Man Against nature stuff.

# In fact, Laitinen coupled with Sachiko Abe at the A, the theme of endurance- both 'feminine' and 'masculine'- comes out

Finally we returned to A Foundation, Bloomberg new contemporaries, a good Finnish artist, Antti Laitinen and the most amazing Japanese performance and work by Sachiko Abe. This was by far the most incredible piece at this year’s Biennial. The artist is seated high up and there is a feeling of the story of the girl spinning gold from straw. She sits there cutting strips of paper which fall from her high position. The cutting sound is amplified in the space. the strips lead to a large pile in the centre of the space. In the space beneath her a series of obsessively delicate drawings are presented and in another ante space a film of paper and elsewhere a meditation space with an ethereal light created from paper.

I also liked Sachiko Abe's performance in front of A Foundation gallery: She cuts thiny bits out of sheets of white paper all day long and piles them to a huge pile.

Sachiko Abe is performing "Cut Papers" at the A Foundation space. To say more will spoil its surprise, but it's a must see

IF YOU haven't already made it along to A Foundation to see Sachiko Abe then I would seriously recommend you doing so.

It's such a simple idea but the result is so beautiful. She sits there for hours each day snipping skinny strips from a sheet of plain white paper which pile up into a mountain of shreds.

You watch her from below - she sits on a sort of balcony within the Furnace space, dressed in white and surrounded by a candy floss of paper. The only sound is the snipping of scissors.

I found it quite a spiritual experience, which may have something to do with the sound of the scissors cutting the paper reminding me of being a child. The sound is definitely exclusive to grown-up scissors, my plastic Crayola ones did not make the same satisfying crunch. But it's also to do with how tranquil she appears, and how goddess-like, creating a landscape out of the tiniest of gestures like the gods on Mount Olympus.

That's how it made me feel anyway. It might remind you of how everything in the world is made up of atoms or you might agree with Abe, who says "My work is neither beautiful nor meditational" - that's up to you.

nice work but this video does it no justice!

nice work but this video does not do justice to it!

Part of the appeal of Sachiko Abe’s performance is its industrial setting in the A Foundation where the artist sits on the roof of a station house apparantly lost in her own world cutting paper which spills over the side of the building and leads to a large sculptural pile of shredded paper reaching up to the ceiling.

Sachiko Abe's paper-cutting performance (accompanied by a series of intricate, pattern-like drawings) is precisely the sort of thing I love: meditative, unassuming, simple; quietly physical and very elegant. The artist sits, perched birdlike in a sort of eyrie, slowly cutting strips of paper; the space is silent but for the sound of her scissors breaking the fibres. A trail of cut paper leads downward & outward, across the floor; then rises up in a great column, fountain-like. It stands opposite the great brick furnace (A Foundation inhabits a former knifeworks), & mirrors it perfectly; the product of an ephemeral sort of industry.

I walked into a warehouse type room to find a beautiful turret of paper, which on closer inspection was made up of tiny shreds of paper, glancing further I saw a woman dressed in white at the top of a mezzanine, cutting into an A4 sheet of paper under a pale spotlight. The intricacy of the piece was fascinating, Abe cuts around the edge of the A4 sheet forming a delicate thread of paper which cascades from the mezzanine and trails to form the paper mountain, which is merely supported by string. A microphone amplifies the cutting sound and I got a great sense of time and presence within the performance. As if Abe had been there for years creating this sculpture, serenely and slowly, part of a fairytale, divine and somewhat magical.
In a separate room there appeared intricate and obsessional drawings. Obviously a theme running through Abe's work. One drawing was on a roll of paper, unfinished. still a vast amount of unrolled paper to work through and two pillows set down on the floor. it was the sense of time which struck me again and the uncertainty of a finished piece. I found the work very calming as if Abe had an escape and was separate from the stresses of life and exists purely for her work. It was this authenticity that I admired the most.

A Foundation similarly presents feat of endurance and presence in Japanese artist Sachiko Abe’s performance, Cut Papers. For the past 7 years the artist has spent 11 hours a day carefully snipping the edges of sheets of thick paper into narrow strips. In reaction to a personal trauma, cutting paper rather than herself transforms self-destruction into a creative act of resistance. A microphone amplifies the rhythmic sound of the scissors while the shards of paper fall from the artist’s spotlit perch into a sculptural tangle rising like a Buddhist stupa from the floor of the vast Furnace Gallery.

I always attend Liverpool Biennial. It never fails to inspire me. It makes me walk, talk and look differently at life and the city of Liverpool. The event now has massive investment and infrastructure enabling it to develop interesting, complex projects alongside hosting some of the best International artists (including those from the UK).

The star of the show for me this year was the enchanting durational piece, Cut Papers by Sachiko Abe.
A Foundation hosted the exhibition:

Sachiko Abe’s work encompasses, performance, drawing, film and sculptural installations using cut papers accumulated over the last seven years. Her practice explores duration, repetition and constraints. Her recent work explores disquieting routines that provoke anxiety and touch us in ways we cannot explain. In Cut Papers Abe invites the audience to experience an intimate space in which the constant snipping of scissor blades is the only measure of time passing.

At A Foundation Abe performed for the duration of the Biennial, an intricate graphic weave was produced by intensive duration periods of cutting paper. Abe’s supporting drawings invite us to contemplate the intensity of ideas which accumulate and are disseminated in the transformation of a white sheet of paper into medium of communication.

An enchanting exhibition, the performance element of the piece had a calming, mesmerising effect. With a dropped jaw, time passed and my fascination grew. Abe’s growing tower of paper clippings were like something from a fairytale, timeless.

Sachiko Abe’s paper-cutting performance, Cut Papers (2010), at A Foundation is somehow affected, its seductive aesthetics obscuring the obsessive madness of the act

Down the road at A Foundation gallery, Sachiko Abe can be seen – in person – cutting up a never-ending trail of white paper in a baffling but beautiful installation, like Rapunzel in a paper-white tower of swirls. A troupe of visiting kids were gleefully cooing over it. (I crossed paths with Whitechapel gallery director Iwona Blazwick in the concurrent New Contemporaries show - a thrilling showcase for new artists. Iwona seemed as impressed as I was, no doubt scoping for a future Whitechapel exhibit).