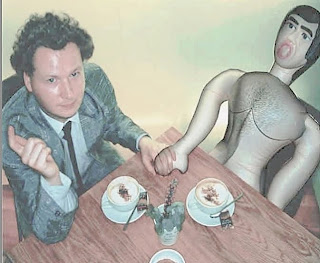 Posted by afoundation at 5:50 AM

Responding to the growing interest in the forms of exhibition spaces for new and emerging technologies, director Roger McKinley used the hi-tech meets lo-fi approach, buying advertising space in established printed publications. Each of the 5 commissioned images featured as pages in specialist art and youth lifestyle magazines including FLUX, i-D, Dazed And Confused, and BLUEPRINT throughout 2001/02.

For artist Dean Hughes his “Flat Staples” image suggests a template for the page that would usually not have such geometry (much like the flat shape of a cardboard box before it was made into its functional shape). What is seen are images of staples in various positions or “states of flatness” – some are opening, others closing.
Artist Padraig Timoney responded to the virtual space with “Livingstone in Deadwood” in which a series of symbolic objects including a corn dolly, lizard, drinking straw and lid, take on a relationship to the axes of 3-Dimensions - up and down, across and back, and illusionistic depth in the 2-D form of the flat page.

As researcher for the Centre for Science, Technology & Art Research part of the University of Plymouth, Chris Speed created “Production Room” to expose the VRML code that is used in the construction of computer 3D modelling. His work consists of a text version (or code) of information that is used by the VRML software to create recognisable shapes.

Julia Waugh's photo of writer/artist/critic Stewart Home stages an intimate moment with himself and a male blow-up doll in “Trip: High Modernism with Lysergic Emanations”. The image of the doll is purposely manipulated to raise its profile above the surface of the picture plane as a subtle look at image and space transgression, central themes to the Variable-D Gallery’s investigation.

Finally, artist and performer Suki Chan teams up with photographer Dinu Li to create an image combining 3-D graphics, photography, and drawing that depicts a scene from a fable of “Princess Jin”. The image is an evocative and ambiguous way to conclude this series of commissions that seems to unravel the aims and ambitions of the project and the future of image technology.