TM: "Imagine - every paranoid fantasy, every conspiracy theory, every alleged cover-up and government deception, every crank story you've ever heard... it's all true. This is a short description of the central premise of Grant Morrison's epic comic book series "The Invisibles" (1994-2000), but it might also go some way in some way to describing one of the central concerns of your work, is that fair?"

JF: "Let's just say I believe that an open door is much better than a closed one. In fact I think it's important - someone who door is closed can be described as someone who is socially controlled if reality is small and simple, then the powerful are all powerful and satisfaction is gained from a limited spectrum of socially and politically important activities and if you look, there definitely a lot of very disturbing and weird material out there. I am interested in reality - as opposed to the comedy - of this stuff. But, I am also fairly rational about it - I have definitely come across a few people who have strayed quite clearly into delusional, I think even they have a relevance - at least they show an attempt at exploratory thinking. Overall if someone thinks or writes convincingly and their evidence appears sound, I opt to believe them. I also know how much can be fabricated - the next level is to look at motivations behind various fictions woven around us - are the conspiracy theorists' fictions more believable, or those of the anti-conspiracy theorists/conspiracists."

TM: "The reality as opposed to the comedy of things - that's an interesting opposition. I'm not sure whether you mean comedy in the Classical Greek sense, or the 'Terry and June' sense, or something else entirely."

JF: "Just the 'Terry and June' sense! There have been a number of artists who engaged with conspiracy theory material in a light hearted critical way. My own engagement with this material as part of a broader research agenda. If one were to expand notions of context to the point where one was making art in terms of the world, one first has to answer the question 'What is the world?'. I began by looking at buisness, politics and law and before I knew it was swept away with the huge amount of conspiracy related material out there. But I am not seeking to lay down an agenda, rather to acknowledge a broader, non-institutional 'wiki-reality' - know of us really know much, a lot of our knowledge is constructed and much of this construction has substantial institutional influence. The question then is why and more importantly where to now?"

TM: "In your 2007 video work 'Wheel' three men carry, assemble and operate a mysterious device in a number of locations in the Ecuadorian Andes. This object (which you have displayed in gallery spaces, along with it's flight case) resembles a cross between a Philip King sculture and one of the robots overlords in the BBC's dystopian children's drama 'The Tripods' (1984-85) The Wheel's function is never disclosed, rather like a dangling plot device in 'Lost' (2004-2010). How central is this non-disclosure to the piece?" 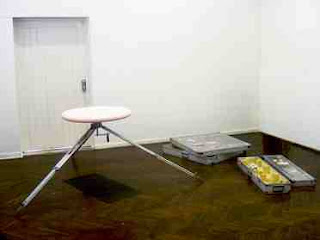 JF: "Fundamental. Although I propose it is not as obtuse as it appears. There are avenues, directions to travel down. There is information, it's just not the kind which offers instantaneous satisfaction. It is important that my work takes someone somewhere and then leaves them there. Then anything they discover on their way Home is theirs, not mine." 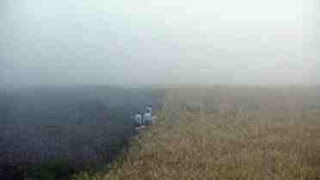 Posted by afoundation at 4:32 AM

"I like the images in this video which was shot in Ecuador but also the sense of mystery. What are these guys doing? Is it the secret service up to something, a scientific experiment, some cultish behaviour or maybe just a strange picnic. And even though all these objects are here in the gallery we still can’t figure out what they do."

(Text from A Foundation..) Fawcett’s use of extensive research into tropes of conspiracy and media cults have allowed him to bring into focus the fuzzy logic of new age mysticism that is proliferating in the era of networked consciousness. His sculptures, video and performances exude a menacing technical precision and seduce with a spectrum of alluring colours but these are aesthetic camouflage to cloak ideas that question the nature of the mediated reality or as the artist says, ‘a fabric of contemporary mythologies.’

In this delicate weave in which ephemeral ideas become locked into the history of material technologies from surveillance drones to kevlar weave, the artist uses strategies that simulate those which have become common in the uncanny world in which we live, paralleling activities such as business, politics and war, and operating on a dispersed, global scale.