Artur Żmijewski - Our Game. Our Party. Our Work.


Polish artist Artur Żmijewski spent some of last Winter and Spring in Liverpool, seeing for himself if the city resembled the sketch offered by those who had invited him to work there and who were keen to see how his process of production would translate to Britain in his first major UK commission.

The central tenet of Artur Żmijewski’s project was an exploration of social stratification of art and after initially holding a set of meetings with the various groups that make up the city's art community, he set up a 'pop-up art school' that attempted to explore and reconfigure art's relationship to wider society. Hosted by the existing School Of Art And Design at Liverpool John Moores University, the pop.up school was modeled on the Bauhaus established in Weimar by Walter Gropius in 1919. At the beginning of the project Żmijewski started "Ninety years ago the Bauhaus school invented a new visual reality - I would like to re-attempt this today. It is probably an impossible task, but that is why it is so interesting." 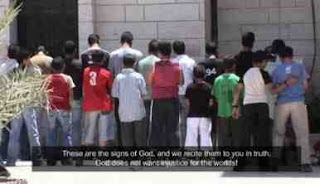 Żmijewski's practice has, on occasion, registered as extreme. For example, the works '80064', in which he persuaded a 92 year old an Auschwitz survivor, Josef Tarnawa, to have his prison camp tattoo re-inked. Another, 'Them', brought together member of different political and religious groups active in Poland to make visual representations of their beliefs. Both contain scenes that provoke outrage and abhorrence, but Żmijewski steady production since the mid 1990s also concludes films made with the deaf an, amputees, the chronically sick and old and ongoing series of film portraits semi skilled workers around the world. These aspects of his production grab fewer headlines but are equally tough. 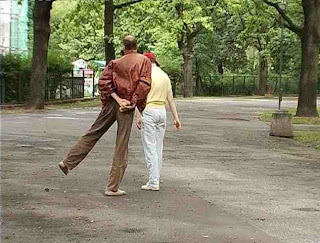 Taken together they form a practice that insists that artists must operate in the real world and address real problems. Żmijewski has said that by achieving a connection with reality art can again learn how to be socially useful - with the implication that along the way it's lost that function. So children unable to hear or control their voice sing the cantata 'Herz Und Mund Und Tat Und Leben', in St Tomas' church in Leipzig, the space for which J S Bach composed it, the disabled borrow the limbs of the able bodied to temporarily conform to societies norms. Individuals whose daily existence has been sidelined by contemporary media who prefer their 'ordinary people' to be in the thrall of celebrity rather than show the reality of everyday.

Żmijewski work stretches and tests the idea of art as a tool of engagement. but his is not work that invites participation to blindly build a community or distract people from the issues affecting their lives - his is work that gives people a space in which to voice and test their opinions, whether banal, insightful or extreme. As a consequence, Żmijewski is always prepared that the result of his experiments may be unpalatable or messy. His working process is the antithesis of much participatory art, which can have the tendency to identify a problem and devise a solution. Conversely,
Żmijewski locates an area for exploration, with the analysis of the problem and the signpost to a possible solution generated by those involved. Sincerely believing that what some may describe as a risky strategy is the way to 'create new realities' for the good of society, he does not prejudge or second guess the conclusion but responds to each scenario he encounters anew, while building upon his experiments that have gone gone before.

This article can be read in Issue Six of A Bulletin.

Posted by afoundation at 4:33 AM

New York, NY. Creative Link for the Arts and the New Museum have announced Hamza Walker, the Director of Education and Associate Curator at Chicago's Renaissance Society, and Polish artist Artur Zmijewski, as the recipients of the Ordway Prize. An international panel of Nominators and a Jury of leading art world figures – led by Jennifer McSweeney, Director of Creative Link for the Arts, and Richard Flood, Chief Curator at the New Museum — selected the Ordway Prize recipients from a global pool of nominees. Walker and Zmijewski will each receive an unrestricted cash prize of $100,000.

"Working with artists is a reward in itself, and I feel privileged at being so generously honored for my passion. I wish I had a grand vision for the award, but as it stands, the bricks and mortar of my life are "said Hamza Walker.

"I was happy to be nominated for the Ordway Prize, but winning was quite unexpected. My art is important to me, and now it has been recognized by others in a significant way and that pleases me immensely. The considerable amount of money that comes with this award will surely help to realize my future projects," said Artur Zmijewski.

The Ordway Prize is awarded every two years to one writer and one artist between the ages of 40 and 65 who have at least 15 years of work experience and have made a “significant impact on the field of contemporary art, but who ha[ve] yet to receive broad public recognition.”