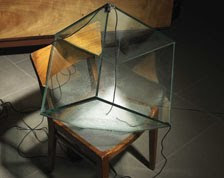 Haroon Mirza considers the acoustic and the visual of equal significance in his work. Combining antique furniture and familiar electrical goods with existing video, musical recordings and noise created by water, static or interference, Mirza’s sculptures create latent symphonies between seemingly disparate objects. This, Haroon Mirza’s first solo exhibition, will include two newly commissioned works. One of the new works continues Mirza’s interest in the effect of sound spillage that occurs between artworks in group exhibitions. This new sculptural installation will incorporate edited and modified film works by Guy Sherwin and Jeremy Deller to create a single musical composition. 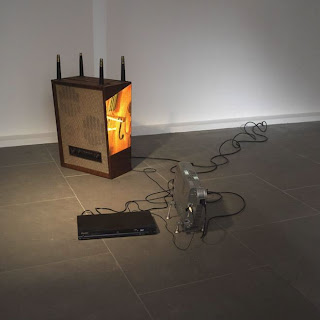 The exhibition will also include Adhãn, recently shown as part of Lisson Presents 3. The title of the work is the Arabic word for the Islamic call to prayer, and emerged from the artist's extended visit to Pakistan in 2007-8 during which he researched the place of music in Pakistani culture. The work includes a looped 1970s BBC clip of Cat Stevens playing acoustic guitar, a close-up film of a cellist projected onto found furniture and the rhythmic activation of radio static caused by a desk lamp turning on and off. 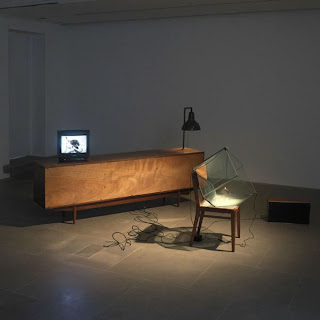 Posted by afoundation at 8:31 AM