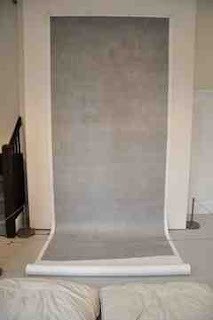 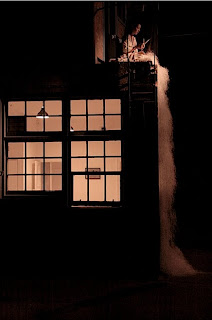 This weekend I went to Liverpool and wandered in to Sachiko Abe’s performative work Cut Papers. Sat on a ledge above the old ‘office’ in a chilly warehouse, she had the air of a fairy tale princess.

A trail of icy white cascades down from her eyrie. The snow-like peak you see in the foreground is the product of seven years’ paper cutting. The room is silent apart from the slightly amplified sound of the blade on the paper. Abe has been in residence for the Liverpool Biennale since September and performs for a total of four and a half hours a day. One of the gallery attendants told us she got chilblains, so they’ve installed a heater behind her now.

Apparently she started cutting paper in a mental institution as a way to stay calm and to avoid cutting herself. In an interview with the Guardian she says: ‘It takes 40 minutes to cut one whole paper. The thinness is 0.5mm. During the depressed period, the thinness is about 0.3mm.’

In the room downstairs there is a small gallery of intensely intricate drawings in pen: produced in intense bursts over a relatively short period of time dark patches occur at intervals; giving the work a surprisingly affecting emotional import when viewed up close

For Drawn In, the Travelling Gallery has been able to commission new works specifically for the unique space, including a wonderful new animation from Katy Dove inspired by some of the places the Travelling Gallery will be touring to; a bold and beautiful wall drawing from Rob Churm and two curious installations by Berlin-based artist Franziska Furter.

Visitors to the exhibition can also examine sketchbooks from many of the exhibiting artists, as well as artists involved in the Travelling Gallery education programme.

The Drawn In Tour: