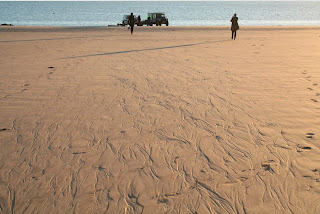 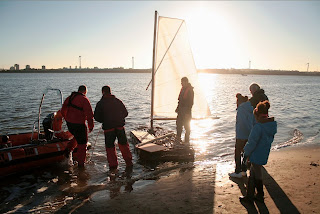 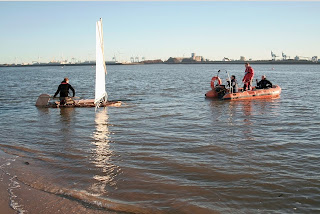 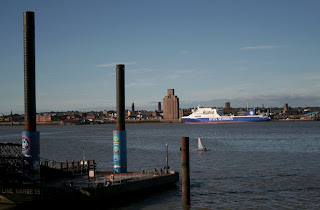 Posted by afoundation at 3:16 AM

It was early in the morning (too early for us) last Saturday that Antti Laitinen set sail from New Brighton in his boat that he’d built from pine bark over recent weeks in the A Foundation. He was fortunate with the weather and tides being just about perfect for the crossing which can be really tricky. These pictures are courtesy of the A Foundation, hopefully there will be some video online soon.

Now Antti has returned home but his exhibition featuring film and photos of previous works and a forest-like tree installation is well worth visiting.

Imagine a white dorsal fin the size of half a tablecloth rising out of the River Mersey off Bootle docks. No wonder the ferry tooted. However, this was no shark, but a giant Finn called Antti Laitinen who was drifting at the mercy of a keen north wind and the incoming tide on a raft.

Certainly the oncoming tanker wouldn’t have noticed as the diminutive craft rode its wash. Thankfully the weather conditions were perfect as he headed up river into the brilliant sunshine.

Antii had set sail at 7.30am from New Brighton and was drawn across to the east bank down to the Pier Head by 9.30am before successfully negotiating the shipping lane to reach Cammell Lairds in tact, but numb with cold.
He had made the raft from nothing other than curls of bark, not of Cork Oak bark as you may have expected but of Scots Pine. It was no bigger than a hearth rug !

He is one of the numerous world renowned artists who make up Liverpool’s Biennial International Festival of Contemporary Art which runs until the end of November in various venues across the city.

This was a brilliantly executed ‘happening’ in an age when ‘risk assessment’ and insurance rates have killed off too many bold adventures. However, it was no Arthur Ransom lark. Antii had already navigated a similar raft across the equally busy Baltic channel between his home town Helsinki and the Hanseatic port of Tallin. On this occasion he sought expert advice from our renowned pilots and was escorted at a distance by a support vessel with a film crew on board.

Hopefully their video will soon accompany the startling exhibition of Antii’s previous events currently on show at The A Foundation in Greenland Street (off Jamaica Steet, opposite Cains Brewery.)

Around the last corner of his show at A Foundation, you stumble upon this workshop of nature-loving Antti Laitinen. The scene is not filled with charm or wonder, but rather shock and horror.

Something unexpected and industrial is going on. There are gas cylinders and what look to be tar bricks. Work has suddenly stopped, hence the volume of wood shavings on the floor.

The boat looks crude. It would do. Its main constituent is bark from the floor of the forest in Finland where Laitinen lives. To make this vessel seaworthy is requiring some violence.

A week after the show opened, the artist rowed this very boat up the River Mersey for three and a half hours. His trip combines elements of the magical and the manic.

Perhaps all ecological statements need a little of either. Fairy-like, the trees shed their bark for our use. Termite-like, humans will work with whatever they can get.

Other works in the show feature the artist digging a burrow into the soil and, apparently, eating ants off the end of a stick. More horror results, but you would have to call Laitinen a survivor.

The Bark is a new commission by A Foundation and the Liverpool Biennial 2010 and can be seen in Laitinen’s show at the former until November 28 2010.

You can read more about the artist on the blog Big Fat Failure or the artist’s own website. Here is also a film on YouTube about a previous 19-hour voyage he made in a bark boat.