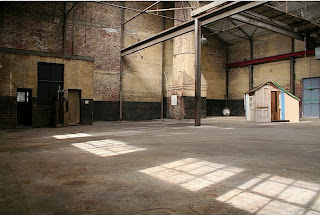 We are pleased to announce an exhibition by artist and filmmaker Ben Rivers’ in the Furnace gallery at A Foundation, Liverpool.
Ben Rivers’ work often explores mankind’s relationship with the wilderness, and with ways of hermetic world-making. Primarily shot on black and white 16mm film, his works are difficult to place in a specific time, depicting lives lived at the edges of society, or imagined landscapes populated with the soundtracks of old films and cinematic trickery.

The exhibition at A Foundation will present many of Rivers’ existing works including the acclaimed Ah, Liberty!, winner of the Tiger Award at Rotterdam Film Festival, and This is My Land, a portrait of Jake Williams, who lives alone in the forests of Aberdeenshire separate from society and with a unique perspective on time – he creates hedges by putting up bird feeders, allowing the birds’ droppings to germinate and grow.

Rivers’ films and models will be shown throughout the space using the Furnace’s architecture and creating unique spaces for screening. The exhibition will also include a new suite of etchings produced especially for this exhibition.
Ben Rivers was included in ICA’s Nought To Sixty programme and has forthcoming screenings and exhibitions at the Serpentine Gallery and Talbot Rice Gallery, Edinburgh. 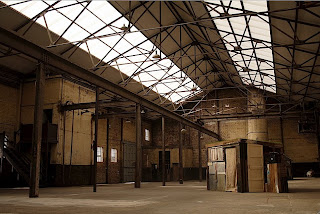 An industrial building by the canal on Vyner Street in London's East End is the last place you might expect to find a glimpse into a world of rural, isolated wilderness. But venture down that street you should, to spend a few moments listening to a man who lives alone in the wild, and to see the landscape of this very country as if it were totally alien – a glorious planet of fetid flora and kaleidoscopic colour. This is the first solo exhibition in a London gallery of artist Ben Rivers, an award-winning film-maker from Somerset in his late thirties, who has a long-term, almost anthropological interest in those who live in isolated locations. Inside Kate MacGarry gallery, you will find a shed-like structure built from discarded building materials: corrugated metal, old windows, garden gates and industrial waste. All surplus to requirement, unwanted and disregarded.

A noisy, rickety projector sits just outside, casting a film inside the ramshackle cabin, which announces itself as "An exploration into the nature of the world via the extraordinary S who lives in the wilderness". S truly is extraordinary, living alone in a cabin in the Scottish highlands in a structure not unlike the one in the gallery, and "evolution", as he says in the film "has been his bag for a long time". Rivers became interested in this isolated character after he heard a friend talking about a man who had spent 20 years reading Darwin's On the Origin of Species, though this turned out to be an exaggeration. S has had much time to ponder his surroundings, however, both through his observations of the forest around him and through his interest in the theories of others, which, we understand from this short film, include evolutionary theory and quantum mechanics.

Rivers's film provides more than an anthropological study of an individual however. Filmed using an old Bolex camera, he presents us with pictures of nature that are beautiful, yet complex. The dramatic splendour on film here is both immediate and nostalgic – the footage is scratchy and grainy, yet bright and too vivid – dappled sunlight is captured soft and yellow scattered over tawny leaves; a tattered spider's web is captured with a pale sunlight shining through it and surrounded by another pink light that is turned into a soft flaring hexagon by the old camera. The film has the appearance of something that has been discovered in a forgotten box in an attic, something from another time, and Rivers is fully aware of the power of this unequivocally gorgeous old material. S describes Darwin's idea that the world was waiting for humans, as if the world needed someone to come and have a look at it, to contemplate it and consider it. And here we are – looking.

From this particularly urban location, nature seems magical, and full of wonder. However, Rivers' film also plays to our fears about a life after some kind of catastrophe – an existence dredged from the waste of a ruined civilisation. Insects crawl over old newspaper pages lying on the forest floor, the new emperors of a forgotten civilisation. Watching S's contraptions at work, made from the discarded materials of others we wonder how we might survive if all the technology we have were to fall away, and whether everything that we have built might lead us further away from the bright twinkling, enchanted world that we see on screen – already it seems far, far away.


Reviewed by Laura McLean-Ferris - The Independent.

Inspired by visionary avant-garde film-maker Derek Jarman, the Jarman Award was launched in 2008 to recognise artists working with the moving image whose work, like Jarman's, resists conventional definition, encompassing innovation and excellence. The winner of the annual Award not only receives a £10,000 cash prize, they also win a unique broadcast commission - to make four artworks for Channel 4's acclaimed Three Minute Wonder Slot (3MW). Any mid-career artist film-maker, whose work embraces the spirit and the legacy of Jarman's highly experimental and risk-taking approach, can be put forward for this annual prize.