The final draft of Perfumed Head contains elements of all three versions. This intoxicating, disturbing and sometimes unreadable prose propels writing/reading to its limits. Steve Beard has, through his use of writing manipulated by computer technology, produced a book that questions the relevance of the printed page in the digital age and that pushes forward the concerns of 'chemical fiction'. 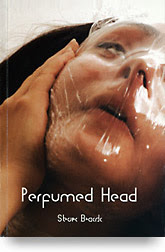 Steve Beard was born in the M4 corridor in 1961 and first moved to London in 1983. He has lived in Herne Hill, Peckham, Brixton, Vauxhall, Islington and Shadwell. His postgraduate years were spent wandering the stacks at Cambridge University library where he was privileged to learn far too much about English literature. For most of the late 1980s and 1990s he worked as a style journalist on magazines like i-D, The Face and Arena. In 1998 he moved to Hove where he met Jeff Noon. Steve has authored the ambient novel Digital Leatherette (Codex) and the artist's book Perfumed Head (Book Works). Two collections of his essays and journalism are available: Logic Bomb (Serpent's Tail) and Aftershocks (Wallflower).

Posted by afoundation at 6:37 AM