A project on the creek in Sharjah, U.A.E. from where a large number of dhows leave for Somalia. Somalia, a collection of semi-state entities, is also know as a 'free trade zone' where formal tariffs and customs do not apply. This arrow of trade, in which the ship of Foucault's Heterotopias is not an escape from but an entry into space of conflict, is our subject. 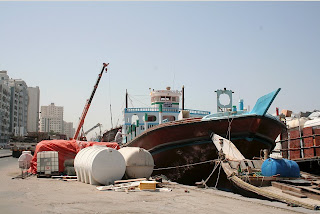 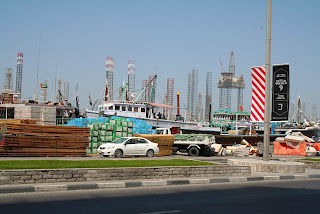 It offers a way to think about how business and the spectral lives of those commodities are part of a global capital. With war up ahead, economic recession at its tail and pirates in the middle, this movement of goods may trace old routes, but maps a contemporary landscape used objects, a diaspora of Somali traders who cannot return, giant wooden ships and urgency. The project consists of two parallel pieces a book a radio transmission from the port. CAMP was started in November 2007 as an artists space in Mumbai, India. CAMP is not an artist collective but a workshop gathering ideas, sensibilities and energies. Its projects centre around an ability to work infrastructually, to produce configurations of technology, space and time that locate human agency in the midst of networks. In 2008 2009 CAMPs members have had exhibitions or partipated in Metrpolis Copenhagen, Dakar Biennial-off, Dictionary of War (Taipei Biennial edition) Manifesta 7 (Companion book) AV Festival Newcastle, 48C Delhi, The Powerplant Toronto (If we can't get it together...) and the Sepentine Gallery London (Indian Highway) among other events. CAMP are co-initiators of PAD.MA footage archive and a umber of other projects out of their home base in Mumbai.

Posted by afoundation at 1:56 AM