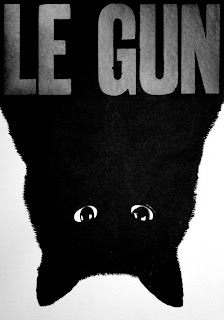 Issue #4 of the narrative art annual LE GUNwill be distributed worldwide from September 2008. The launch will coincide with an exhibition and temporary arts club taking place at the Rochelle School in Arnold Circus, Shoreditch titled
LE GUN The Family

In the exhibition, the warped collective imagination of LE GUN presents a dysfunctional family of many generations, including a man with a crab on his head, the leopard walking heiress Marchesa Casati, and the original fat boy actor Joe Cobb. Raised on the the streets of parallel metropolis Legundon, an eccentrically Anglo-Saxon place of loose women, gin and cream cakes, and Francis Bacon�s butchers shop, they are an unusual dynasty. LE GUN�s gigantic black and white ink drawings record the families journey from their home cities murky streets and dens of vice, across a wild unchartered ocean to an outlandish Interzone of mind bending intoxicants and bordellos, and the jungle funeral of unloved street urchin Caliper Boy.


Simultananeously the new LE GUN publication will be launched.The net has been cast far and wide; LE GUN #4 promises a rich and slippery harvest of pictures and words, a catch that includes Polish artist-crustacean Andrzej Klimowski, Will Sweeney, creator of Tales of Green Fuzz, visionary draughtsman Paul Noble, and writing from beat generation expert Barry Miles and dandy of the underworld Sebastian Horsley, as well as fresh fruit from young novelist Richard Milward, ethnographic writer Iain Sinclair and the Hunter S Thompson of Hartlepool Michael Smith. Added to these afore-mentioned are the less well known but equally delectable new voices that have been chosen for fullness of flavour  and keenness of eye...

The result is a vivid story of stories and stands as an independent work in its own right; somewhere between pulp fiction and an  artist�s edition. Undigestible in one sitting, this confection asks to be treasured and revisited... 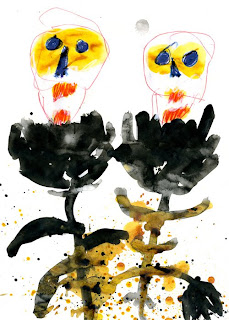 
On Friday night, Gelitin performed Yes OK Ex at the Rochelle School in Shoreditch, presented by Grizedale Arts and A Foundation as part of Agrifashionista. Gelitin are four male artists from Vienna, Austria. They are currently showing their boating lake Normally, Proceeding and Unrestricted With Without Title at the Hayward show Psycho Buildings.

On arrival at the Rochelle School we had to sign a waver. We were then invited inside to find four half-naked men bouncing on two huge trampolines, paint-brushes in hand.

The wall and ceiling opposite the audience was the prepared canvas. They jumped with their rears to the audience, floaty chiffon skirts revealing all. We may have felt excluded until we realised that they were painting us. We were the subject of their work.

Whether it's digging a hole for seven days, knitting a monster bunny in the Hills, or fitting a balcony to the World Trade Center, Gelitin produce work which invites everyone to participate.

Port City: on mobility and exchange - A Summer at Greenland Street

Traditionally ports have been seen as gateways to a wider world, representing a point of contact and exchange with different countries and cultures, facilitating the movement of people as well as goods and ideas. However in an era of globalisation, port cities have ceased to have such territorial allegiances, becoming simply trading points on a worldwide network. The works by the artists in this exhibition explore the idea idea of a port city as a symbolic site of cultural exchange. 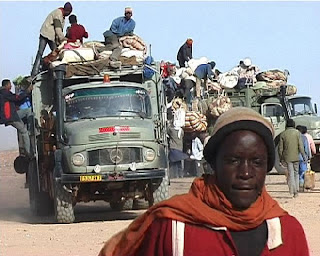 Several works in the exhibition and screening programme draw attention to the experience of migration, in particular between North Africa and the Mediterranean. Ursula Biemann presents Sahara Chronicle a video installation focusing on migration routes and also curates a screening programme of artists’ moving image works and documentary films that will be shown throughout the exhibition.

The exhibition also includes a video presented in a giant pillbox by Erik van Lieshout, an installation made in response to the media and looting frenzy that resulted from the wreck of the MSC Napoli by Melanie Jackson, and a vast model of a global cityscape made from sugar by Meschac Gaba, to which an iconic Liverpool building will be added during the course of the exhibition. 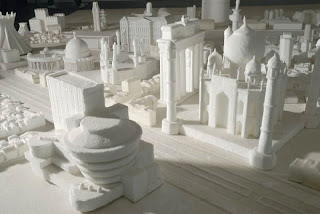 Sweetest Building
Thank you for voting for which building you wanted to see added to Meschac Gaba's Sweetness cityscape. The winning building is the Liver Building, which has been added to to the sculpture and will be on display until the exhibition closes on 23 August.

Posted by afoundation at 5:05 AM

Great article and your blog template is so cool. Is this template free or not. If so, Where could i download this template? if not, how much does it cost? Thanks a lot!
By Air Jordan shoes

Ursula Biemann presents Sahara Chronicle a video installation focusing on migration routes and also curates a screening programme of artists’ moving image works and documentary films that will be shown throughout the exhibition.

Great info! I recently came across your blog and have been reading along. I thought I would leave my first comment. I don’t know what to say except that I have enjoyed reading. Nice blog. I will keep visiting this blog very often.