The exhibition at A Foundation Liverpool celebrates the unique relationship Tatsumi Orimoto has developed with the mediums of translation which allow audiences to become participants in his artworks. An early pioneer of what was to become known as "relational aesthetics', he used the camera as a way of taking art into the public realm and inviting the people to become essential actors in new artworks. In the era of flashmobs and instant imaging his strategy of taking art to the people seems like a prophetic paradigm. Also significant is that they show the importance of pictures in the construction of the memory of events. In order to hold onto our experiences we have to become producers of our own mythology. Through his legendary Bread Man persona Orimoto has traveled the world and featured in numerous biennials from Sydney to Venice. His motto might be: "All you need is Bread", but A Foundation asked him about his life and work:

AF: You have exhibited at the most prestiguous Museums and international biennials and triennials including Venice, Sharjah, São Paulo and Sydney. Some people might let this go to their heads, but you keep the Fluxus ideals of simplicity and playfulness in your work and use cheap materials like bread and discarded dolls, are you not tempted to make the Big Shoes your mother wore on brass or gold?

TO: I always use cheap materials especially in sculptural works - disposed cardboard boxes, newspaper that have been read, the cheapest bread, letter boxes from demolished houses. I have heard a story: the manager of a team collected players who were fired due to their age. He gave them "one more chance", the players were revived by acknowledgment of their "last chance" and they produced great results. I would like to give "the last chance" to these materials that are left as useless and waiting to be burnt. They can be useful "one more time" in my work.

My mother is 91 years old and has become unable to work by herself. Perhaps, the worldview may be tougher on her existence, but she looks glorious in my work! I never considered making the Big Shoes in gold. 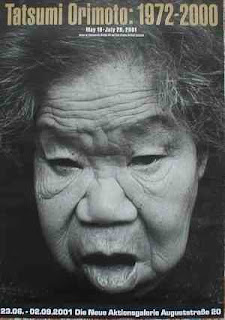 AF: Before it became fashionable to talk about relational aesthetics and audience engagement with artworks, you were a pioneer of this style of making art with your series, Event Communication. It seems that you wanted to offer the public the surprise of artwork outside of museum. Why did you take your art to the public?

TO: Shortly after I came back from New York in 1991, there was a rent based gallery called Gallery K who invited me to do a performance. The genre was hardly known by Japanese audiences at the time. Bread Man was organised with another person, but only 3 visitors came. Then, I thought, there is no point in waiting for the audience to understand. So, I brought 2 Bread Man out of the city on the next day and this was the very beginning of Bread Man series outdoors.

Ever since, I realised that the artworks do not have to be presented inside the white cube of museums or galleries. Instead I can spread out into public space, train stations, streets, cafes, restaurants, hospitals, markets etc. This is also developed my thinking why don't I make artworks through communication and documenting audience reactions who are not only Japanese or wealthy, but reaching our to the poor all over the world.

AF: You studied at the Institute Of Art in California in 1969, which must have been fun, but what did you think of the West Coast Art scene, were there artists who you thought inspirational?

TO: I failed the entrance exam of Tokyo University Of Arts 7 times and there was nowhere to go. So I went across to the US and luckily I got in to the Institute Of Art. But LA in the 60s had such nice weather, warm, hardly raining and I only wore one t-shirt with a pair of trousers. people drank beer from lunchtime with no sign of motivation in the university. Now we can tell famous people graduated such as Paul McCarthy and Mike Kelly, but I felt somewhere with nice weather without much energy in life cannot produce art any art. There was nobody inspirational at the time and my teacher told me why don't I move to an exciting city like New York, so I left LA to New York after over 1 year.

AF: After you graduated you were an assistant to Nam June Paik which introduced you to the art scene in New York, but also gave you experience of using new materials such as video, which was hot new technology at the time. Was his experimental and humorous approach contagious for you as a young artist? 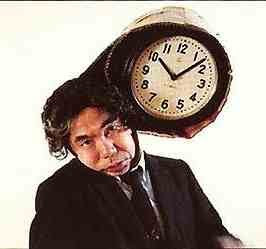 TO: When I moved to New York, Nam June Paik was selling the studio, so I bought it off him even though it was a dark and dingy place. My studio was on the third floor, but the second floor was the exhibition space for Fluxus group. Paik had just started his video art, he was learning as the worked in the educational programme department in TV broadcast company, he produced his works there. So I would say I learned performance art from Nam June Paik, as well as taking his old studio space - I would say it taught me a lot by seeing performance by Fluxus artists, Arman, George and Gilbert and Joseph Beuys and thought, "right this is what the performance art is".

This interview continues in the A Bulletin-Issue Six.

Posted by afoundation at 6:55 AM