Terrance Houle is a contemporary aboriginal artist of Blackfoot and Ojibway descent whose interdisciplinary techniques call attention to the traditional cultures of his heritage in an informative, intelligent and in many instances, humorous way. A superbly talented artist in his own right, Terrance just saw the end of Givn’r, a five year retrospective at the Plug In Institute of Contemporary Art in Winnipeg, Canada which showcased over 70 of his pieces. 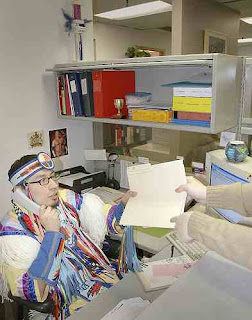 As there are already quite a few great articles about him, which I loathe to regurgitate here (like this one for example in Canadian Art or this one in Absolute arts), I thought a nice, informal Bookface chat would be more appropriate... which in itself would be a way to further draw out the juxtaposition of opening a dialogue with an artist whose work centers on age-old traditions, but finds it necessary to utilize the verymost modern technical devices to do so. So, without further ado, my Bookface chat with Terrance Houle.

Travis
hey Terrance, you got ten minutes for an interview?
Terrance18:43
hey Travis I do have 15 minutes

Travis 18:43
hey now
what's been happening since the last time we spoke?
that was about four months ago now, im ashamed to say

Terrance 18:44
mm well I went to Thunder Bay for my Givn'r show and did 7 artist talks/tours
lol
just been getting back in the saddle with work starting new series'
currently have work up in fort Simpson NWT at the OPEN SKY Gallery

Travis 18:46
what new ideas are you working on? 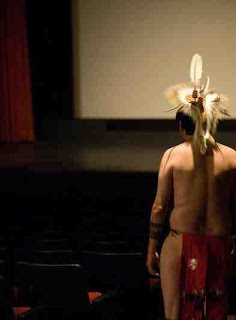 Terrance 18:46
well I have a video series I am working on right now that Involves Video Portraits of Residential school attendee's in their favorite place or space

Terrance 18:48
the ages are from about 50+
so its a feature length video work that I am in the process of right now.
as well I am starting the national Indian Leg Wrestling League
I have an upcoming show with Rebecca Belmore at the OR Gallery in Vancouver opens end of April

Terrance 18:50
hahaha
no not really

Travis 18:50
ha! tell me about leg wrestling and this upcoming exhibition
both sound pretty exciting

Terrance 18:51
The show with Rebecca is a two person show curated by Darrin Martin from Vancouver
The works are still kind of in Development for that show
The National Indian Leg Wrestling League is a series of Photo/performance/installation and film works based on Wrestling and Leg Wrestling
I've asked several First Nations Artists to create their Leg Wrestling Identity and I will be creating wrestling costumes
then do portraits of them in classic wrestling Posters of the 50s, 60s, 70s

Travis 18:53
that sounds incredible
we've got to get you over to Liverpool

Terrance 18:53
yea man its pretty amazing stuff
ive been basing them off old wrestlers like

Read the rest of the interview at:
www.comeintoland.com/interviews/terrancehoule/

Posted by afoundation at 2:46 AM