Berlin and That : An exhibition by Oliver East - The International 3

Berlin and That is the second exhibition at The International 3 to feature the work of Manchester based artist Oliver East. 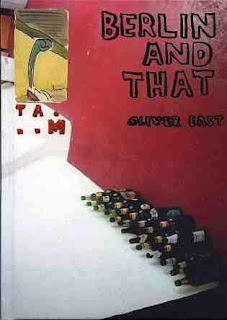 East has made the act of walking the starting point for a practice that ends as a comic book.

Berlin and That is his third book in the series Trains Are…Mint, it sees the artist walking from Berlin’s Alexanderplatz to Frankfurt (Oder) on the Polish border, keeping as close to the train line as he can without trespassing. From memory the journey is then documented with each A3 page being exquisitely rendered in ink and watercolour, recording the mundane and ordinary, the beautiful and extraordinary. For this project Oliver then gave one page each to his friends, artists and non-artists, musicians and pro-drinkers alike, to alter as they please. 52 people collaborated on the book and these 52 pages (a third of the finished book) will be on show.

Each book starts with psychogeography, attempts some social commentary before the inevitable autobiographical elements creep in.

Oliver East started self publishing in 2004 with Looking For Kinder Scout, a guide book, before making his first comic in ’05, The House Of Fire To Black Hill. This was distributed informally, giving them to friends for free in pubs ‘’and such like’’. In ’06 with added colour, the first publication in the Trains Are…Mint Series was born.

Berlin and That is published by Blank Slate Books and will be available form The International 3 at a special exhibition price.

Posted by afoundation at 4:32 AM