The Economy of Art - A DACS Debate 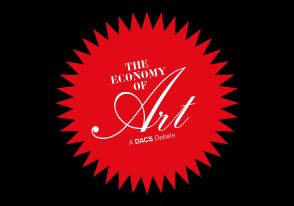 The first in a series of high-profile DACS debates on visial artists in the 21st Century. Chaired by Alan Yentob, a distingished panel of artists, economists and commentators including Susan Hiller, Paul Graham, Alan Freeman and Michael Landy will explore the value of the visual arts to the economy and society at a time when the value of traditional sectors are being seriously challenged.

The Panel
Alan Yentob (Chair) is the Creative Director of the BBC and Editor and Presenter of the Imagine programme. A celebrated and award-winning programme maker, Alan became the BBC’s Creative Director in June 2004.
Susan Hiller is an American-born artist, living in the UK. Her practice encompasses installation, video, photography,
performance and writing.
Paul Graham is a UK-born, New York-based artist photographer whose work uses and abuses the classic genres of photography to map a cultural and social topography.
Alan Freeman works for GLA Economics, the Mayor of London’s Economics unit, where he leads the unit’s work on cultural economics and city comparisons.
Michael Landy is a London-born artist best known for the performance piece-cum-installation, (2001), in which he destroyed all of his possessions.

Posted by afoundation at 2:24 PM