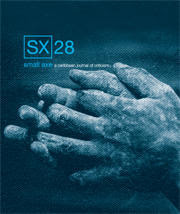 Ingrid Pollard presents a film portrait of her parents including their migration from Guyana to the UK in the 1950s. Using archive photographs and audio interviews she asks questions of remembrance and how we feel and articulate what is family and home.

If you are a big tree, we are a small axe.” As this Jamaican proverb (popularized by Bob Marley) suggests, a small axe is an instrument of criticism. This is what our journal aims to be: a small axe. Since the demise of New World Quarterly (journal of the New World movement) in the late 1960s and Savacou (journal of the Caribbean Artist's Movement) in the late 1970s, there has not been, in the Anglo-Creole Caribbean, a significant independent journal devoted to social, cultural, and political criticism. In different ways, the agendas of New World Quarterly (led by Lloyd Best) and Savacou (led by Kamau Brathwaite) were cultural-nationalist in orientation. Importantly, these were oppositional nationalist projects, nationalisms positioned counter to the complaisant middle class (or liberal-rationalist) nationalisms through which the postcolonial nation-states in the Caribbean were being imagined and constructed. Both journals sought to think critically against the Eurocentric norms of historical and cultural understanding of Caribbean society. Importantly too, both journals weren't concerned merely to dismantle the epistemological assumptions of European/Western understandings of the Caribbean; they were concerned also to explore the idea of an idiom of criticism that was vernacular, that is to say a practice of criticism that both gave form to, and spoke from within, a Caribbean cultural-political tradition.
http://www.smallaxe.net/