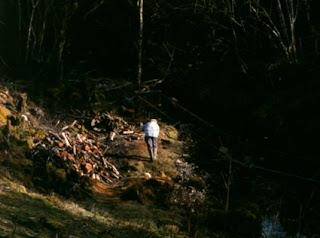 Within each hut is screened a unique film, two of which portray the lives of individuals who have made the isolated pockets of Northern Europe their home. Living self-sufficiently off the land, the subjects of the films are independently evolving a way of life that quietly, but resolutely, refuses to submit to the demands of conventional living. The third, shown at Permanent Gallery, was made of a film-set in Hamoroy, Norway.

The title of the exhibition refers to the name of a book by Norwegian writer Knut Hamsun. Hamsun held a deep mistrust for civilisation and believed a life’s fulfillment was only to be found through the soil. ‘On Overgrown Paths’ came about as a final defense following Hamsun’s condemnation by fellow Norwegians for sympathising with the Romantic ‘Volk’ elements of the Third Reich. Hamsun embodies the principles that the characters within these films adhere to, whilst his life-story demonstrates the political misappropriation that the return to nature has suffered.

Mimicking the cluttered liberty these recluses seek, Ben’s camera moves with a sensitive and inquisitive abandon. Using experimental processing techniques and utilising the fragmenting effect of the 30sec longest continuous shot of a wind-up Bolex, the films emphasise the incomplete nature of the cinematic portrait, while preserving a sense of the private. What emerges is a richly textured and intimate ode to the patterns of the lives portrayed.

Posted by afoundation at 6:15 AM